I have always been fiercely protective of my son, it goes without saying really, he is part of my being, therefore I will protect him.  Call me ‘The Lioness’, ‘Mama bear’, or ‘Mum’ I am a warrior for him..ok I have finished the gladiator rhetoric let me explain.

Towards the end of last year  a conversation was had, the end result being, my son would be going to Barbados for the Easter of 2015 with his father.  I cannot lie the ‘Yes thats fine‘ cut my throat as if I had swallowed nails, and a porcupine to boot, but the decision had been made.  I felt it was, and IS important for my son to have special bonding time with his father, not to mention the amazing memories to be had.  He was four, he wasn’t attached to the  breast anymore (Praise Jesus), he didn’t need to be fed every ten seconds, winded, or checked for nappy rash.  He could speak, he was growing like some sort of string bean, and I was panicking.  The time away would amount to nearly three weeks and as I slowly pressed the button of my now melted Samsung S4, I panicked.

I stuffed my fear to one side, and talked to myself almost every other day, saying, ‘Alison it will be alright‘.  I researched the Island, I didn’t know enough about it, but people had told me it was nice place to visit, to get married, honeymoon, have a girly holiday blah, blah, blah..but would it keep my precious cargo safe? I mean I know a few people who have gone, and have come back looking half decent, apart from a few Mosquito bites here and there, I had nothing REALLY to worry about.  When I broke the news to people, I got mixed views, my family and friends where cool they thought it was a great idea, and pretty much said it would be a lovely opportunity.  However I did get a few raised eyebrows, sucking in of breath, and the occasional “Are you suuure”?! “Thats a VERY LONG TIME”

I started to doubt my own intelligence, I mean I really did! all sorts of scenarios were playing out in my mind.  As the months turned into weeks, and then days it was soon time for him to go, my little friend was leaving.  I downloaded the Planefinder app in order for me to track his flight, I contacted his father on numerous occasions to make sure he hadn’t forgotten anything, and prayed.  This was his first time away for a significant period of time, and my first time away from him. I can never explain the mother/child or even mother/son bond but it felt like an invisible cord, being pulled tighter, and tighter.

So as I watched his plane taxi on the runway (I watched through the app) I imagined his excited face, his big eyes wide with anticipation.  Although I was happy and proud of his bravery, a pang of sadness crept in.  I was sad because I wasn’t part of his excitement, his emotions were not being played out in cinematographic greatness so that I could see.  All I had was an app, and a hope that it would all be ok.  Don’t get me wrong, the rest from being ‘Mamabear’ was amazing, I didn’t have to do the mundane drop-off, or pick-ups.

I could be ‘Alison’ again, but who the hell was she? I had all this time on my hands, but didn’t know what the hell to do with myself.  Maybe some of you think I am mad, and maybe I am, I mean I plotted and planned what I would do with my free days and evenings, and believe me it all sounded great..in theory.

I made arrangements with friends, filled out my diary and so on but in reality after the day had ended my home was void off the little voice, that often rendered me unconscious especially when at its highest pitch .   I remember standing at a bus stop and speaking to a dear friend, saying “I haven’t taken a bus straight home in ages” .  The last part of my journeys,  usually consisted of me picking up my son in the car, and battling through traffic.  I did enjoy myself, taking trains around London, shopping, people watching, but it all seemed strange..didn’t have the same allure  it once had when I was ‘Alison’.  I am now many things, many hats, many names, many characters, many versions of me.  But my most important yet is Mum. 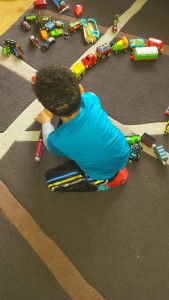 My life changed when he was born, and even when I do have the time on my hands my thoughts still trail back to him.  He’s been back a few hours, and I am already tired would I change it? Nah.

One Reply to “Mama Bear”